Doree Armstrong wasn’t worried about the package she’d ordered arriving on an early December Saturday. An email from Amazon had confirmed it would be delivered later that day, and—in response to previous thefts—Armstrong and her husband had installed front- and back-door cameras that alerted their phones every time a camera’s motion sensor was triggered.

So she was surprised when a neighbor showed up at her door holding an empty box addressed to the Armstrongs. The neighbor had found the box in front of her own home several blocks away. Cameras captured images of a hooded woman snatching the box from the family’s porch, and Armstrong was able to share that video with readers of her neighborhood blog as well as the police. But the Christmas present for Armstrong’s son was nowhere to be found.

“The very next day someone stole a package from my neighbor’s house down the street,” said Armstrong. “I was being especially watchful and talking to everybody who walked by, so I don’t know how I missed it. Yesterday, I saw a package on the front steps of another neighbor and I texted them to say I was bringing it into my house for safekeeping!”

Armstrong and her neighbors are hardly alone. According to a recent study from August Home, Inc., a provider of smart locks and smart-home access products, some 11 million U.S. homeowners had a package stolen in the last year. Fortunately, there are ways to refund or recover your pilfered parcels, and steps you can take to keep your packages out of the hands of thieving Grinches altogether.

When a delivery doesn’t arrive when expected, your first instinct might be to assume it was stolen. But delivery companies process thousands of orders a day, and items do fall through the cracks. Whether or not you’ve received a delivery confirmation from a courier, contact the delivery company to confirm that your package was actually dropped off when their tracking services said it was. In the case of a mistake, your package may still be on the way.

Next, check with neighbors. Some drivers find a neighboring house to be a safer delivery option. Some friendly neighbors (like Armstrong) go out of their way to store others’ packages for safekeeping. And some parcels are simply delivered to the wrong address.

If nothing turns up, contact the seller. Many retailers will opt to refund or replace your purchase immediately and deal with the delivery company themselves, saving you the legwork. If the package was instead sent by a friend or family member, contact the sender to confirm that the address was correct and everything else was in order; if so, your best recourse is to file a theft report with the delivery company, be it USPS, UPS, FedEx, DHL, or Amazon.

How the carriers can protect your package

There are two ways major carriers allow consumers to bypass a parcel dropped on a porch: by having customers use the web to schedule delivery windows, or to re-route packages to a different address as needed. Having packages sent to a work address, for instance, could be one solution.

USPS, UPS, and FedEx use the same model for residential customers: accounts and some basic services, like notifications of an impending delivery, are free. Customers must then pay for other services, such as setting a precise delivery time or having a package re-routed to a different residential address.

Amazon has led the effort in trying out a new option: package delivery to a central location. Their rentable lockers allow customers to pick up their package from a secure space. Others are getting in on the act as well, with USPS currently test-marketing GoPost, its own system of package lockers. Meanwhile, UPS AccentPoint pairs consumers with nearby businesses that will accept and store your packages.

Stopping pilferers at the porch

Emily-Ione Kinney, a Salt Lake City veterinary technician, says a rash of neighborhood porch thefts led her to begin redirecting packages to the office. But it was a stolen car and a swiped supply of her father’s homemade jam from the porch that finally led her and her boyfriend to shop for webcams.

“Porch theft is actually a big problem in my neighborhood,” Kinney said. “There are a lot of people with porch and carport cams. We’d rather place them overtly and deter any more theft than tempt someone and hope to catch them.”

With a crisp enough image, security cameras are a tool for aiding law enforcement in identifying thieves. Live-streaming cameras, such as the Blink or Nest Cam notify you immediately via mobile phone that a crime has been committed.

For a bigger investment — and some sizable porch real estate — lockable parcel boxes offer superior package protection. The Landport Lock Box (starting at $499) is a steel container that bolts to any surface and is opened via a code you share with your delivery service.

Finally, there’s the Package Guard, a sort of car alarm for your porch. This Frisbee-sized, wifi-enabled device notifies your smartphone when a delivery is placed on its surface, and it must be disarmed before the package is moved. It’s a lower-tech approach, but if it works, that’s all that matters. Anything to scare off a porch pirate intent on putting a humbug in your holiday. 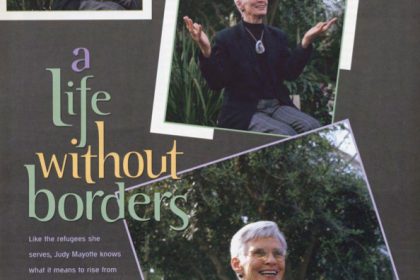